Today we were heading for Sancton which is more or less at the foot of Arras Hill just a 30 minute drive out of Hull. Or to be more precise it’s 30 minutes once we’d cleared the queues of work bound motorists clogging up the roads. We arrived at the village a little after 8 and Col was already there champing at the bit and ready for the off. After his trouser faux pas last time out he was taking no chances today as he was sporting his brightly coloured, some say luminous, gaiters.

There was no forecast of rain but it was a dull overcast day non the less. As we gradually climbed up Sancton Wold along Dale Road the wind became increasingly biting. Being at the western edge of the Yorkshire Wolds there was nothing to stop it between our location and the distant Pennines. Once at the end of the track which joins Hessleskew Lane we headed due south passing a couple of farms then turned west again at Gare Gate. 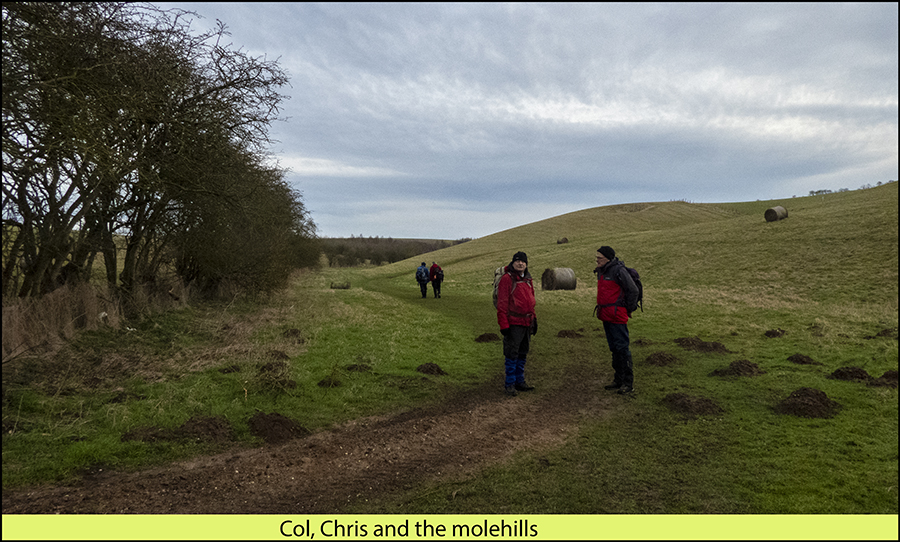 Dropping down from this exposed position we decided to stop for a brew at the edge of an unnamed wood. We’ve used this spot on previous occasions and it’s not unpleasant sat on the hillside amongst the trees being quietly serenaded by the nearby whispering wind turbines. It soon became apparent that it’s also a popular route for local dog walkers with a couple passing by as we sat enjoying our grub.

However we were somewhat unprepared with what came next when two women arrived along with eight dogs, none of which were not on leads. One hungry looking pug in particular had managed to slip under the gate and was clearly on the lookout for something to eat with everyone attempting to keep it at bay with feet, hands and voice. 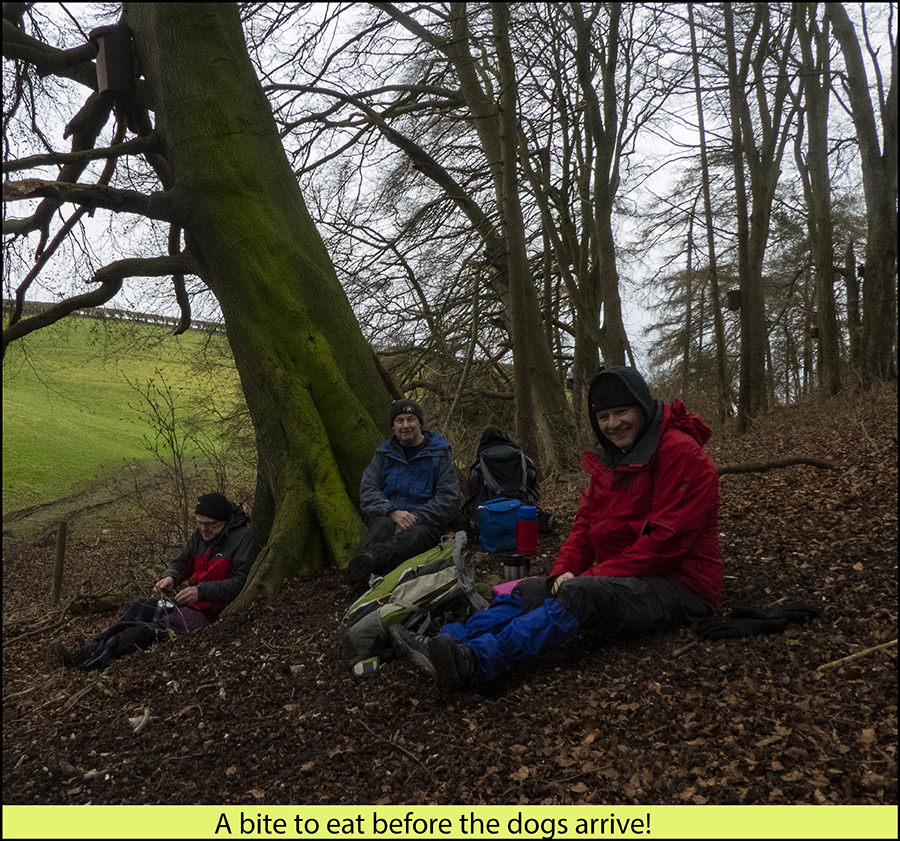 The women didn’t seem too pleased at having to put all eight dogs on leads and as they passed by one of the dog walkers muttered rather sarcastically “Thank you, gentlemen”. Gentlemen? Did she mean us? They probably pass by here every day at this time and clearly don’t take too kindly to having to round up their charges to secure them on their leads. A short while later another lady dog walker passed by and after a brief conversation it became clear that she’d also had a run in with the massed dog walkers and she didn’t seem impressed by them either.

Due to our early start it was obvious we’d arrive at our half way point well before beer o’clock so once in North Newbald we headed for St. Nicholas’ Church. This is not for any particular religious yearnings you understand but it’s a handy place to sit for awhile amongst its quiet splendour as we waited for the pub to open. Needs must. 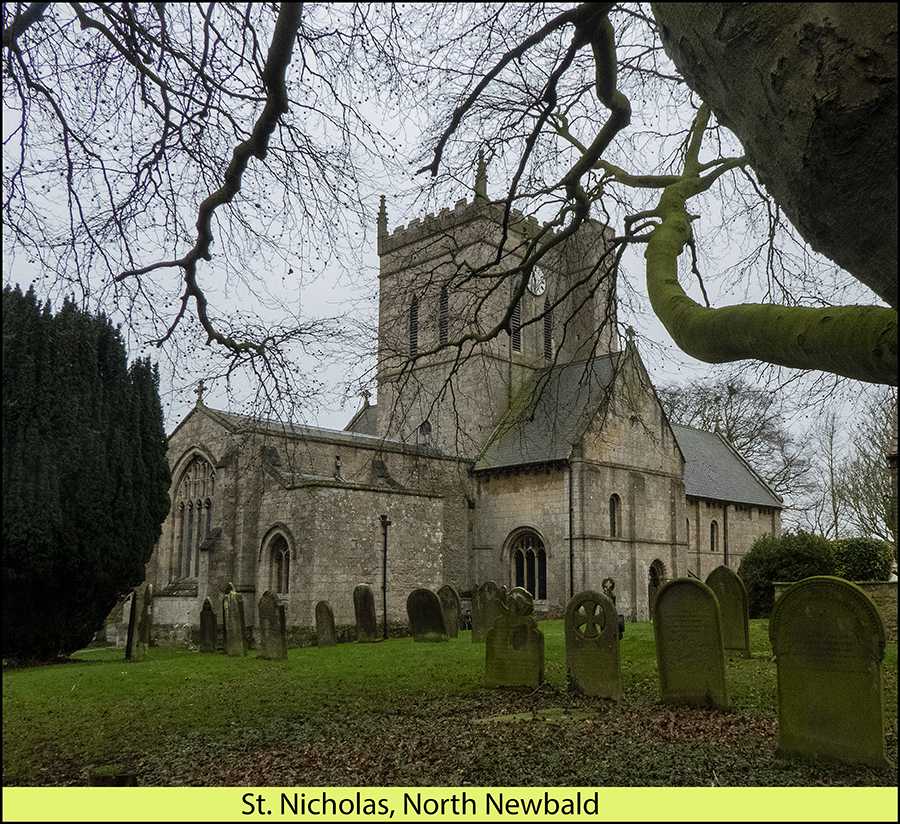 North Newbald is blessed with two pubs, The Tiger Inn and The Gnu, situated opposite each other on the village green. We have had a tendency to use The Gnu in recent times but today we decided to favour The Tiger Inn with our dishevelled presence. As the church clock struck 12 we were already crossing the car park where just outside the pub we were met by the sight of the landlord busy plucking and disemboweling a bouquet of pheasants. That’s a good few pheasants in case you were wondering.

We were the first customers in and ordered 4 pints of Timothy Taylor’s Landlord pale ale plus a mug of tea for Stu. The Tiger is a nice homely pub with a most welcoming and friendly Mr. & Mrs. Landlord plus the menu looks quite interesting…Cajun haddock anyone? But the beer! Oh dear, it left a lot to be desired. Keith even suggested Sarsons would be a more appropriate name. We really should have complained but who’s to say that the replacements would have been any better. Suffice to say those were the only drinks we bought but had the ale been better kept it’s very likely some of us would have had another. Anyway gnollocks to that, we could well be back to The Gnu on our next visit to North Newbald.

The afternoon portion of our walk was somewhat shorter than the first half starting with a trek along the seemingly never ending Cliffe Road before reaching that well known quagmire commonly known as Houghton Wood. On reaching the edge of the wood we passed by the The Cottage although the O.S. map insists on calling it The Cott. This rambling collection of buildings and outhouses is notable for the pack of dogs, securely fenced in I might add, that roam the perimeter fence barking enthusiastically at anyone or anything passing by. But today, not a dog in sight. Ironic really when you consider the number of dogs we’ve encountered today, including one in the pub.

Houghton Wood didn’t disappoint as regards mud and mire, it’s a marshy and water-logged place even in the height of summer so in late January we all knew what to expect. The wood is notable for a couple of other things, the first being the abundance of rhododendron bushes which seem to be taking over and slowly strangling the surrounding woodland.

It’s also suspected that crocodiles can be found skulking amongst the various muddy pools and swamps that litter the woods. The disbelievers among you should be aware we have photographic evidence taken on our last visit to Houghton Woods and as the official FAC photographer Mr. Bilton never tires of telling us “The camera never lies”…allegedly. Despite all this we lingered long enough in the dark dank woodland for a brew and a butty before setting off for Sancton. 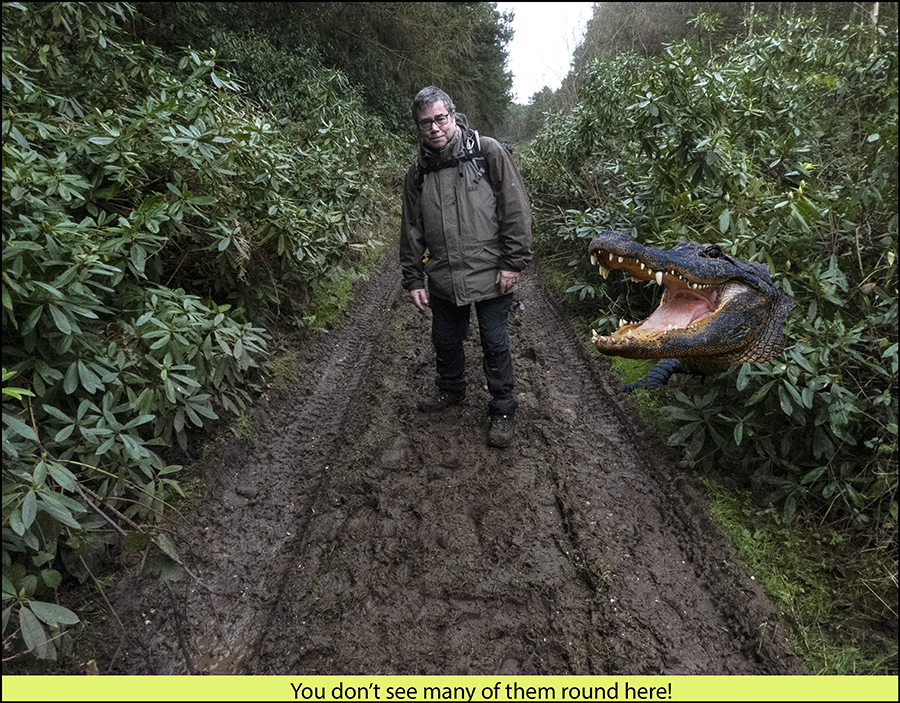 For fans of Col’s fortnightly exploits there were two instances of note. The first one involved a pheasant being startled as we passed by almost giving Col a heart attack as it took flight. We least expect this reaction from Col as he claims he’s an army trained killing machine ready to terminate any threat…as long as it’s not a startled pheasant. Later as we headed into Sancton he discovered he’d lost his hearing aid, or at least he thought he had. He found it later in his walking jacket pocket which would explain why he thought we were all mumbling.

The weather may have been dull but the day certainly wasn’t.

A day for forgetting things. Keith forgot his money, Dudley forgot his tea bags and John & Stu forgot to bring anything to sit upon while having a well earned brew in the ruined church at Wharram Percy. Luckily Ray had a spare sit-upon but on throwing it to Stu it struck him on the side of the head. It was suggested that hard hats and hi-viz jackets might have to be worn on future grub stops. Bob drove up to The Cross Keys at Thixendale to indulge in our traditional lunch. Now recovering after his encounter with the surgeons knife he wasn’t yet fit enough to do any walking but seemed quite capable of demolishing a plate full of egg & chips in double quick time.

FAC scribe Jacko reports that it was very wet underfoot with numerous patches of snow lying around. At some point during the walk everyone present either slid in the mud or slipped in the snow. Ray wasn’t satisfied with falling down just the once as after getting changed out of his muddy gear at the end of the walk he slipped and fell in the mud again resulting in him getting changed back into his muddy walking clothes. The question posed by Jacko was did he slip or was he pushed?

Bob describes what sounds like a tough walk which took in Ouse Gill and Monket Bank before enjoying three pints in the Feversham Arms in Church Houses where damp feet were dried on a golden Labrador. During the afternoon the intrepid three climbed Horn Ridge then crossed West Gill Beck followed by a murderous climb out of Farndale onto Rudland Rigg arriving back at Rudland Farm as daylight was fading. Phew!

Before you leave, have a skeg at the gallery and also the previous walk (in case you missed it).