Thursday 13th February 2020 Seaton Ross, New Plantation, Baulker Farm, Southfield Lane, Oldflat Wood, Clayflat Plantation, Lane, Everingham, Petersfield Wood, Carr Lane, Seaton Ross (7 miles). Cloudy start, sunny later. Chris, John, Paul, Paul ‘Sherlock’ Holmes, Stu, Keith. The weather forecast for the morning didn’t seem too promising but such things don’t deter the FAC. We met up on the Beverley by-pass and headed out for Seaton Ross situated in the flat-lands west of Market Weighton. The journey was pretty straight forward, or it should have been. For reasons best known to himself Sherlock took the first left at the end of the by-pass and headed towards Walkington. Almost immediately his passengers Stu & Keith alerted him to this error of judgement using traditional Anglo-Saxon phrases to drive home their point. A quick reversing manoeuvre soon had them back on track with all thoughts of another devious ploy to gain extra money for fuel far from anyone’s mind…until now! The area around Seaton Ross is virgin territory for the FAC so our first thoughts on entering the village was where to park. A check on Google StreetView a couple of days beforehand didn’t highlight anywhere obvious but we eventually found a suitable roadside berth in the main street. A gaggle of six ne’er do wells from that there Hull certainly got the curtain twitchers interested but at least we knew someone would be keeping a careful eye on our cars while we were away. There’d been quite a bit of rain overnight but by the time we were ready for the off it had ceased with the promise of brighter weather on the southern horizon. John had brought a couple of Sue’s legendary scones for Stu & Sherlock to enjoy later in the day but this time he’d had the foresight to hand them over before we started walking. In the past John has struggled to keep up as he lugged around the scones, masquerading as door stops and/or wheel chocks, before handing them out at our grub stops. We set off walking south through the village with quite a few fine looking houses to admire as we passed by. We eventually struck off down a puddle strewn track and across open fields towards New Plantation. Heading towards Baulker Farm we skirted acres of lush green grass destined to be sold as turf to adorn gardens county wide. It must be good business as the farmhouse was quite grand with a top of the range car parked alongside to match. The rolling green acres had Stu wishing he’d brought a golf club or two as it looked an ideal place to practice his golf strokes. With all the recent wet weather in the wake of Storm Ciara we’d expected to be wallowing around in mud but in all honesty it wasn’t that bad. Certainly the fields were awash with the sloppy stuff but the footpaths were in generally good condition although there was plenty of standing water to either skirt around or wade through, whichever took your fancy. We stopped for a brew and a butty at the edge of Oldflat Wood and sat facing south we actually had the sun in our eyes which was not a scenario we’d envisaged when we set off from Hull. After our welcome break we set off north through and alongside woodlands and field paths to Clayflat Plantation then walked the half mile along the lane into Everingham village. For mid February It had turned out to be a superb day weather wise with plenty of winter sunshine. Wet underfoot of course but we’ve encountered much worse at this time of year. The track out of the village was between tall hedges and trees and alongside interesting gardens eventually heading out into open countryside along field headlands. It was certainly a good route back into Seaton Ross and as we neared the village there was a fine crop of snowdrops at either side of the track. We arrived back at the cars which were as we’d left them some four hours earlier, the neighbourhood watch having lived up to their name. We got changed out of our walking attire and headed off to Osgodby and part two of our day out. The walk around the Seaton Ross/Everingham area had been deliberately chosen to avoid the flood plain of the River Derwent which is not many miles away. That area has a tendency to flood at the best of times and the wet winter we’re part way through is far from the best of times. The evidence was plain to see as we crossed the river at Bubwith which was much more a lake than a river. We arrived at The Wadkin Arms some 20 minutes later and as on all our visits to this fine hostelry we immediately felt at home. The Waddy is superbly run by our friends and former work colleagues Martin & Alan and as ever they looked after us admirably. The beer, tea and coffee were free and they laid on a fine spread of sandwiches and sausage rolls and to a man we all wished it was our local. It was good to see them both and to catch up and hopefully we’ll see them again soon. 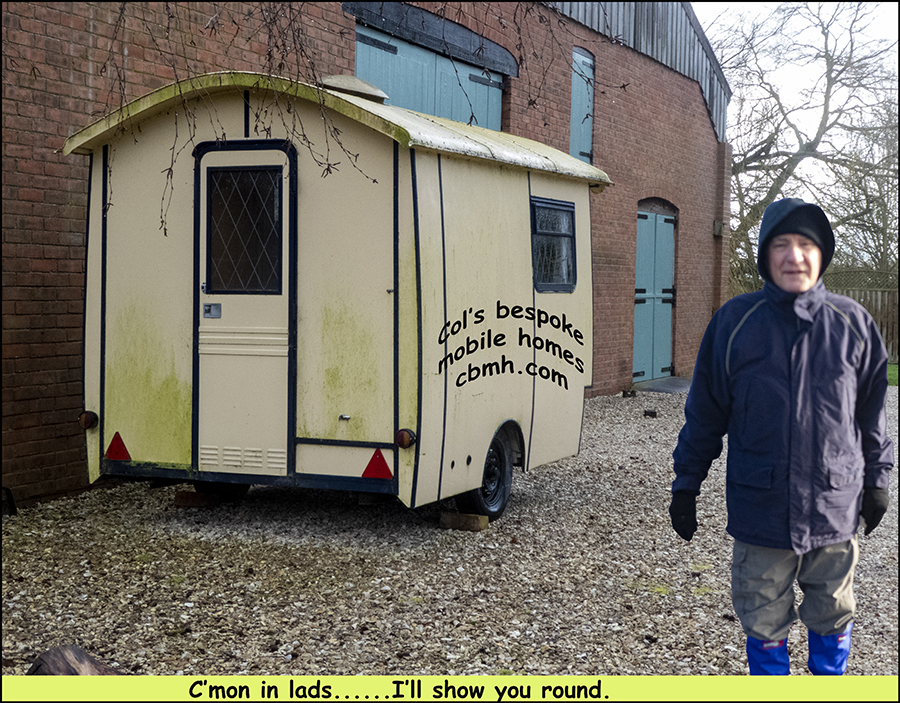 It had been a great day out with an excellent walk with fair weather topped off with a visit to The Waddy. All that was missing today was Col who had a previous engagement with a caravan, although he was with us in spirit. Still, he’ll be back on the next walk, so see y’all then! ON THIS DAY 11th February 2010 – Millington to Bishop Wilton Paul, Chris, Stu, Craggsy, Keith, Dudley, Ray & Jack Rhoades. A sunny but cold day on the Wolds and icy underfoot. There were some excitable horse galloping about at Warren Farm. As Keith attempted to take a photo of the bucking broncos his mobile phone rang. For one brief moment he appeared not to know whether to put his camera to his ear or his phone to his eye. Keith’s dodgy knee wasn’t playing up too much today and his foot problem had been cured by some sort of magic gel inside his boot. However he seemed to have developed a hitherto unknown medical complaint called Megabus arm. Bob had driven up to The Fleece in Bishop Wilton to meet us as he recovers from his recent internal plumbing issues. Apparently we thought he’d had a relapse when he was heard to mutter “I’ll get these in” when he actually said “I bet it was freezing”. We also received a call from Costa del Col basking in the sunny Spain as we froze in snowy East Yorkshire. 15th February 1995 – Thorgill (Rosedale) to Hutton-le-Hole Bob, Chris, Jacko, Ray, Dave Hunt, Paul & Barry. Jacko reports the weather was mixed and the going was extremely wet underfoot. Ray lost his money in the pub (The Crown in H-le-H) but in the best traditions of the FAC it had been found before Ray discovered he’d lost it. We met a bloke surveying footpaths and we were able to give him some measurements in fathoms. Bob’s quote of the day was “It’ll be alright round the corner”. It wasn’t. 13th February 1975 – Appleton-le-Moor to Fadmoor. Bob, Jacko, Jim Cranwell, Chris & Wally Swift. Bob reports this was Jim’s first outing since his serious illness plus they had a surprise visit from Wally who’d gone sick for the day. The infamous Plan X in action. They had a break in the old school in Hutton-le-Hole which was being converted into a shop. They arrived at Gillamoor at lunchtime but found The Royal Oak closed so they headed for Fadmoor only to discover The Plough Inn also closed. However the landlord took pity when he saw five dishevelled figures outside the pub. They returned to Appleton via Grouse Hall, Douthwaite Hall and Spring Wood.